In many parts of the world, people with disabilities face barriers to full participation in society. In some places, having a disability puts them in physical danger.

In February 2016, with funding from the Disability Rights Fund, women with disabilities from UFMORH participated in civil society briefings of the Committee on the Elimination of Discrimination Against Women (CEDAW) in Geneva. Joining together with other Haitian women’s rights actors for the first time, they outlined major challenges faced by women and girls with disabilities. 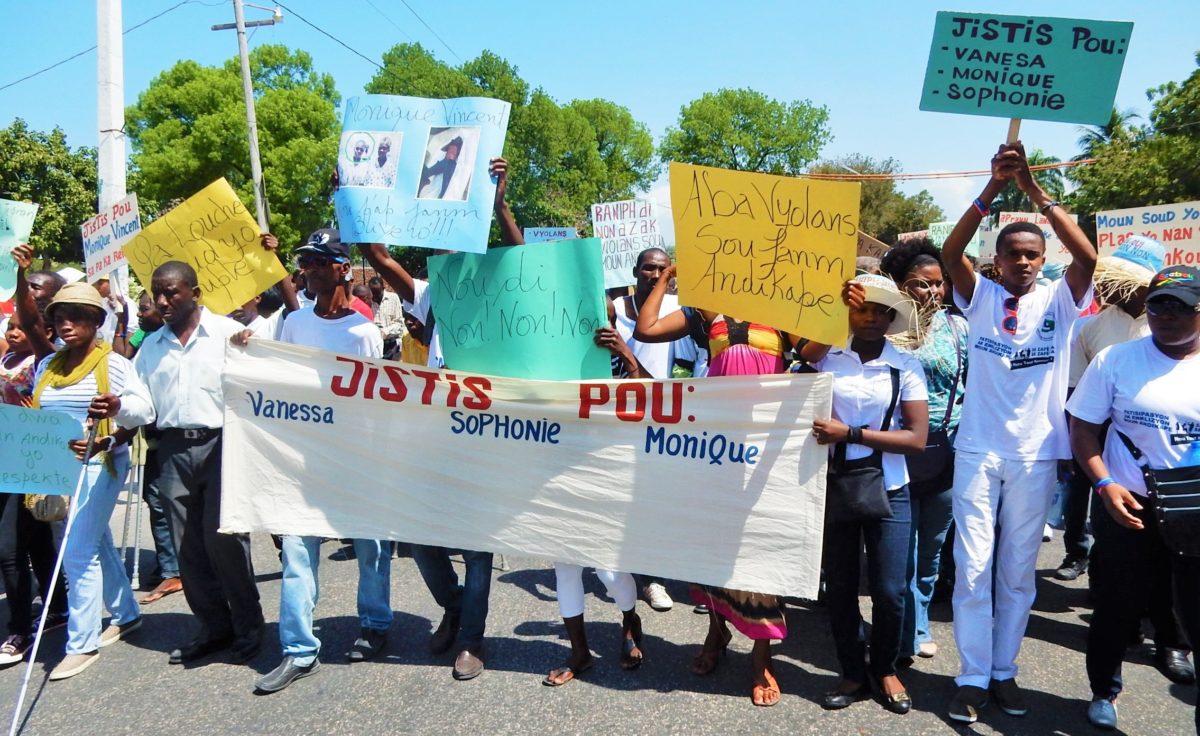 After the murders, and with the CEDAW report in hand, disparate movements came together to demand justice. Jo-Ann Garnier, DRF Haiti Grants Consultant, said:

We are now beginning to see cross-sector collaboration and commitment to a collective goal, with activists and students organizing marches together with human rights, women’s rights, and disability rights organizations.

Tragedies, both natural and man-made, reveal the depth of the challenges facing persons with disabilities. And at the same time, they propel activists with disabilities into leadership roles and make new coalitions possible.

As the movement grows, activists are increasingly able to articulate gaps in rights for persons with disabilities, including in times of disaster.

When Hurricane Matthew hit Haiti in late 2016, after a season of collective activism, Emilio Neas, lawyer and coordinator of RANIPH Sud (National Association Network for the Integration of Disabled Persons Southern Coalition), a grantee of both DRF and DRAF, said:

We recognize the efforts to respect the human rights of persons with disabilities, but we must also acknowledge that these rights are not always respected.

The struggle to ensure that persons with disabilities receive equal access to information and services, and are not made additionally vulnerable due to gender or other identities, is ongoing. But, thanks to the work of the grantees, more activists are involved, and stories of exclusion are reaching the media and the government. Organizations are working on violence prevention and gender policy reform, as well as working with municipalities on inclusive reconstruction and disaster risk management efforts.

A chorus of voices is now involved in demanding change.

In 2017, RANIPH Sud consulted with persons with disabilities for the re-drafting of a report to the United Nations and gained a wide representation of voices from different parts of Haiti. It helped to galvanize disability leaders around human rights monitoring.

In early 2018, a delegation of eleven disability advocates accompanied by Jo-Ann Garnier, DRF/DRAF’s Grants Consultant, travelled to Geneva to present the findings of their report to the CRPD Committee. They highlighted rights challenges for persons with disabilities in Haiti, including forced sterilization, an inaccessible justice system, exclusion from the national gender equality policy, and inaccessible disaster services. These were among the issues taken into account in the Committee’s Concluding Observations.

Haitian DPOs are now ensuring that the broader disability community and the public are aware of these recommendations so that the government takes action.

DRAF, DRF, and the International Disability Alliance (IDA), provided financial and technical support to the national DPO umbrella, RANIPH-SUD, to bring the delegation and their support persons to Geneva, and facilitated technical assistance to them during the entire reporting process.