The Road to Unity

“Penyandang cacat” or “people with defects” was a term in Bahasa Indonesia that was commonly used just ten years ago for persons with disabilities. The road to ratification of the Convention on the Rights of Persons with Disabilities accelerated a debate among disability activists to change this terminology and its accompanying world view. Now, the commonly used terms are rights-based and people-first — “penyandang disabilitas” (people with disabilities).

Shifting the paradigm from a charity or medical approach is starting to change the perception of persons with disabilities.

Eight years ago, in 2010, when the DRF and DRAF first started grantmaking in Indonesia, the landscape of disabled persons organizations (DPOs) consisted primarily of Jakarta-based national organizations led by men with disabilities and working in a fragmented way with limited resources. In rural areas and outside of Jakarta, DPOs are still characterized as low capacity and unfamiliar with the rights-based approach or how to access foreign funding.

With increased activism of the disability movement funded by DRF and DRAF, there have been significant milestones. At the national level, the CRPD was ratified in 2011 and a new Persons with Disabilities Act was passed in 2016. DPOs are advocating for necessary budgetary allocations to implement the Act and to raise the level of urgency and political will. In 2017, an Alternative Report was submitted to the CRPD Committee by a team funded by DFAT’s Australian Indonesian Partnership for Justice.

DPOs are engaging with the government as reliable and informed stakeholders, including in official working groups on the Sustainable Development Goals (SDGs). As a member of the SDGs NGO Forum, DPO Ohana has been provided expertise on disability and the SDGs to national and local governments, as well as provided training to other DPOs from across the country.

Another DPO, CIQAL, has been involved in provincial forums on the SDGs to train local government, village officials, and persons with disabilities, to combat the charity and welfare approach to disability.

New actors in the disability movement have emerged at the local level to advocate for accessible public infrastructure and access to education, justice, and health. A diversity of persons with disabilities, including women, youth, and indigenous persons with disabilities, are advocating for their rights with government officials during local development planning and budgeting processes.

Efforts of grassroots DPOs are now reaching villages where stigma and discrimination are hard to overcome.

In the disaster-prone areas of Jogjakarta, Aceh, Padang and Klaten, persons with disabilities and their families are advocating to their governments for disability-inclusive action plans so they are no longer left behind. Staff and volunteers from DPOs are going door-to-door so that children with disabilities who are hidden can be counted. One of these grantees, the FKM BKA, a cross-organizational forum of persons with disabilities in Aceh, was internationally recognized by the Zero Project for their work in inclusive evacuation practices. 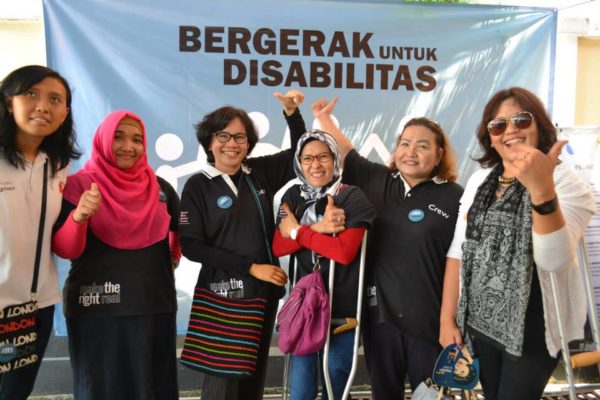 Unity is also about becoming allies with the women’s movement and other movements, and with mainstream civil society organizations working for the betterment of all people. Just recently, in a force of unity, DPOs formed a coalition to advocate against a draft bill on gender-based violence that includes a discriminatory clause against women with psychosocial disabilities and women with intellectual disabilities.

In Indonesia, as in other countries, the disability movement continues to advocate for the rights of a diversity of persons with disabilities.

Back to “Countries”
Go to Top